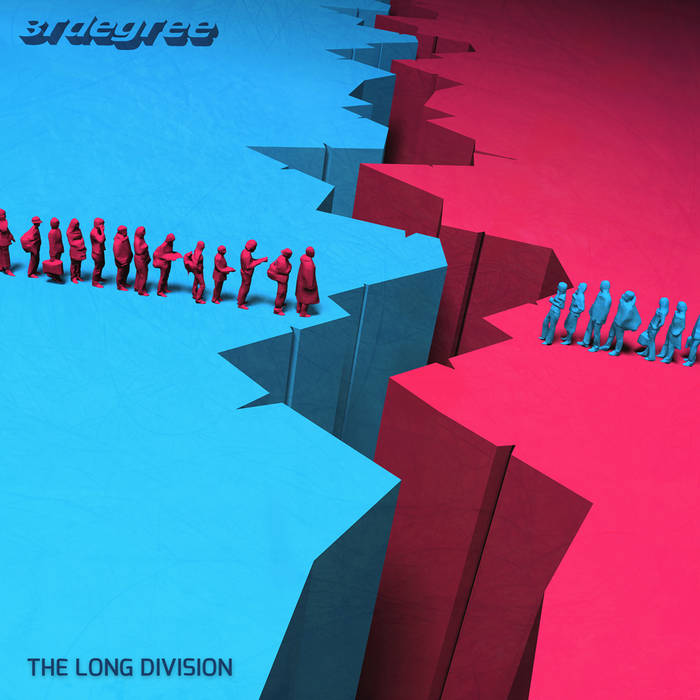 Jean-François Cousin Perhaps on the pop side of progressive rock. Nevertheless, the music sounds very "refreshing". Favorite track: You're Fooling Yourselves.

This is the EXCLUSIVE place to get this album at BEYOND CD quality-24bit/44.1khz-FLAC or Apple Lossless (ALAC)

“You’re Fooling Yourselves!”, wails 3RDegree lead singer/keyboardist George Dobbs on the band’s lead-off single from the new CD THE LONG DIVISION-their first since 2008. This song-as well as a few others on the first half of the album-flesh out the band’s 2012 political treatise: that America’s political parties (and probably those in other countries) have long divided it’s populous on the basis of color, salary, sex, age and much else, have played on their fears, and have used their accumulated powers to build up largesse to keep their supporters in the fold. Ok, it’s not always that heavy, but the album was penned in the shadow of the 2008 economic collapse that was happening right as 3RDegree were releasing their first album in 12 years: NARROW-CASTER. While that third album was a combination of fresh songs and resurrected ideas from the period just before the band’s original breakup in 1997, THE LONG DIVISION is in the shared vintage of Tea Parties, Occupy Movements, shovel-ready jobs and banks and car companies “too big to fail”.
As with the last album, Los Angeles-based Pat Kliesch (guitarist/backing vocalist) would share ideas back and forth with his two New Jersey band mates: band leader Robert James Pashman (bassist/keyboardist /backing vocalist), and the aforementioned Dobbs. Using online tools to share and with all three proficient with digital audio workstations such as ProTools, demos were created and shared with new band mates Eric Pseja (guitarist/backing vocalist who had been working with the band since their 2007 The Reunion Concerts DVD/Blu-ray) and Aaron Nobel (drummer who was added just in time for the Live At ProgDay 2009 DVD/Blu-ray-replacing the departed Rob Durham) before going into the studio to record the foundation drum tracks. Songs like the Dobbs-penned “The Socio-Economic Petri Dish” and “Memetic Pandemic” would be shared with North Carolina’s ProgDay audience in their embryonic states, but all else except the live favorite “A Work Of Art” featuring Pashman on piano with Dobbs singing beside him-and the only track resurrected from the 90’s incarnation of the band-would be arranged later on.
After the big splash in small progressive rock ponds worldwide that NARROW-CASTER had made throughout 2009 with the Dutch Progressive Rock Page (DPRP.net) reveling: “It’s not often an album as refreshing as this comes along, and we should treasure it when it does...an album that demands repeated spins, and rewards every listen with some new revelation”, 3RDegree tried writing/demoing and performing occasional shows in Brooklyn (alongside Phideaux), Connecticut’s Marprog (with Holding Pattern), outside Washington D.C and Chapel Hill, North Carolina’s ProgDay (with Ozric Tentacles), but found that doing live shows once in a while was really slowing down the process of getting another studio album together. Stretching things even further, 3RDegree found that they were working on some tracks with another theme that weren’t going to work in this collection. Good news though: perhaps the wait for a fifth album will be a shorter one than ever before!
THE LONG DIVISION carries on the mission statement created 20 years earlier by Pashman and Kliesch in the infancy of the band when they would try mixing accessible melodies with the conventions of progressive rock to a pre-internet, cover-band loving New Jersey: no need to wax poetic here. Releasing a debut cassette THE WORLD IN WHICH WE LIVE in 1993 (with Pashman on lead vocals), 3RDegree then decided to step up their game in 1995, adding a world class lead vocalist in George Dobbs and releasing their first CD-1996’s HUMAN INTEREST STORY. After playing many live shows in the NYC area gaining little traction, the band hung it up, leaving much of a nascent NARROW-CASTER sitting on the cutting room floor. Dobbs would continue musical endeavors including solo albums, Pashman and Kliesch would work on projects together and a solo album each apart, but talk of 3RDegree was couched in the past tense until Pashman would make a video collection in 2005, putting together all the band’s music videos and performances onto DVD and arranging demo cassettes onto CDs. Discussion of the songs left behind bubbled under throughout that year until all original members met at a NYC bar after Christmas where it was agreed upon that the band would record again.
So while NARROW-CASTER felt more like a “comeback” album, THE LONG DIVISION is possibly a more impressive feat for the band: a fresh helping of tracks illustrating the band’s 20 year old formula need not be tinkered with for any perceived audiences’ expectations.